After having hiked in the Pyrenees for the first time carrying full gear a few years ago with experienced friends, we did our first trekking with the two of us in 2003. Often when we go hiking in the Pyrenees, we take the highspeed train to Paris, and from there the nighttrain to the south of France. In this case our destination was Ax-les-Thermes where we did some shopping, before going one stop further to Merens-les-Vals, where we started our trip. 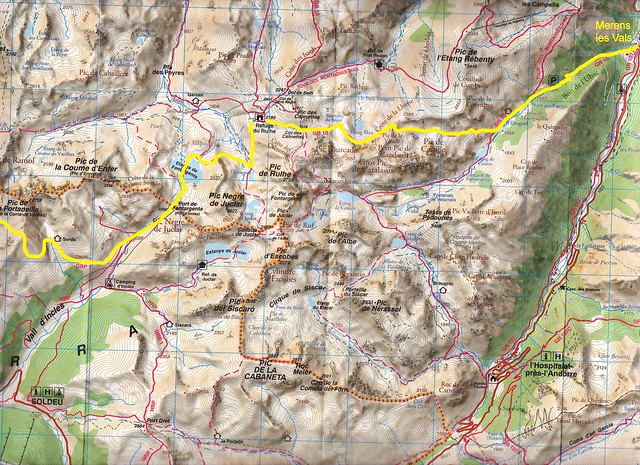 Map with first part of trekking

The first day is always difficult, having to get used to walking in this type of terrain, the heavy backpacks and the climbing to gain altitude. Our first camp site we aimed for was the refuge Rulhe. Upon arrival, we put up our tent and went into the refuge, where our evening meal consisted of a bottle of coke, and some potato chips. Too exhausted to do anything else than listen to a not so funny hut warden (although he thought differently) teaching a class of school kids about the mountains. Weather was really great and we continued into Andorra, picking up freshly painted trail signs from the cabana Sorda in Andorra. 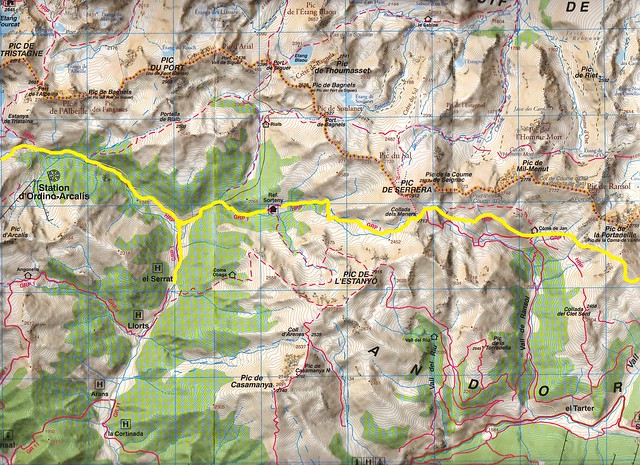 Map with second part of trekking

During the whole two weeks of the trekking we had terrific weather, although for one of us it sometimes was too hot. We noticed also then that the hottest moments in the Pyrenees are often later in the afternoon. In the afternoon of the fourth day we arrived in tiny El Serrat: just a few houses and a hotel. After drinking something on the terrace, sheltering again from the late afternoon heat, we decided to stay in the hotel. 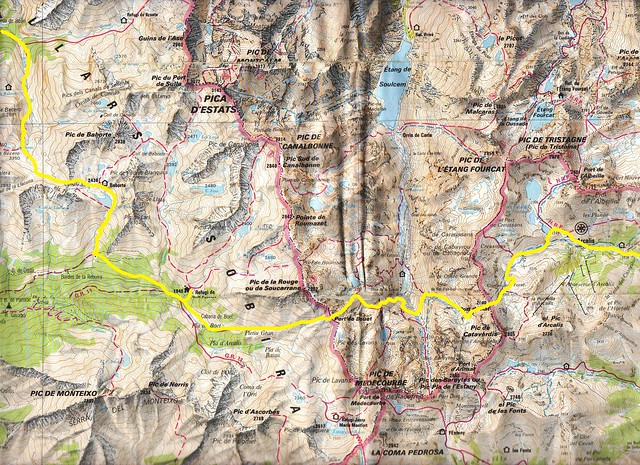 Map with third part of trekking

The next day we walked through a nice part of France, sandwiched between Andorra and Spain. That night we experienced hut life for the first time at the refugio Vall Ferrera, sheltering from a heavy thunderstorm. The small refugio was crammed with people, all taking shelter for the storm, which provided a nice atmosphere inside. From Ferrera we went over the Coll de Sellente. We pitched our tent at the beginning of the dirt road to Tavascan where we had to deal with very curious cows, forcing us to eat while moving around. We stayed two nights in Tavascan, making a dayhike through some small mountain villages. 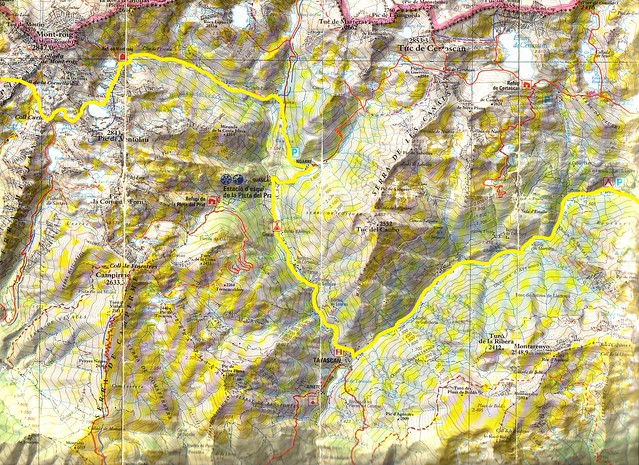 Map with fourth part of trekking

After the two relaxing nights in Tavascan we went into the mountains again, to pick up the HRP trail at Noarre. We decided to stay in the Refugio Mont Roig since there were two spare beds and the space to pitch a tent was limited. We had a good night sleep in the lovely hut. What came the next day was a really nice hike through a lovely part of the Pyrenees. The Galina lakes (Estanis de la Galina) and the collada’s we passed are very beautiful. The favorite parts of our hikes are the rest stops at the passes. The nice views, the unexpected company of eagles (when you are lucky) can bring a tremendous feeling of joy. But the most striking experience when on a pass is the feeling of entering a new world. Every valley in the Pyrenees seems to have its own very special atmosphere. 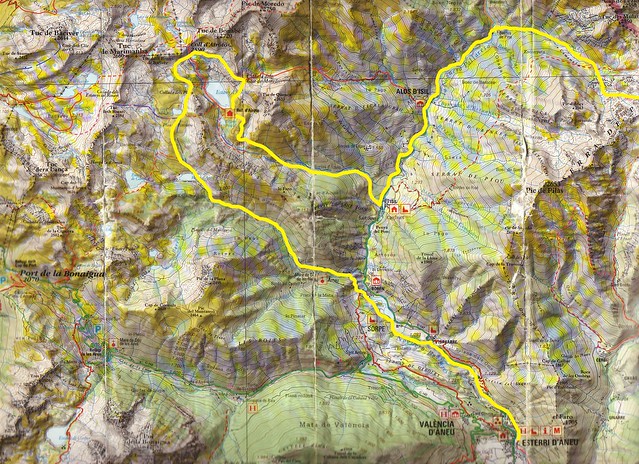 Map with last part of trekking

Going down the rocky area below de Coll de la Cornella we camped near a small unnamed lake at approximately 2060 metres . Even at 6 pm the heat of the sun was unbearable and we had to find a place in the shadow of our tent to wait for the sun to set a little. It’s a beautiful spot; the lake filled with tadpoles. The next day we walked down to Alos d’Isil where we hoped to buy some fresh bread and some food but we couldn’t find anything. After some sightseeing in the small village, we decided to hike the four kilometres or so on the main road to Isil. This wasn’t a punishment because of the enormous amounts of flowers and butterflies that we encountered on the road. It turned out that Isil also didn’t have any shops, so we stayed in a small hostal where they also served dinner and where the next day we could buy some bread for lunch. From Isil we hiked up to the Estany d’Airoto from where we tried to find a route to the Coll d’Airoto passing the lake on the left (west) side. We had to scramble through fields of rocks and bush, so halfway we thought we saw a better route along the other side of the lake. After going back and inspecting that route, we decided to stay a night in the refuge d’Airoto and enjoy the surroundings and nice weather for the rest of the afternoon. The next day we started early to find our way along the eastern side of the lake. When we reached the estanyet the Marimanya d’Isavarre it should have been easy to find the Coll d’Airoto, but we failed and found ourselves on a too steep slope and decided to return. After that we made the decision to change our plans and instead of going to Salardu, we ended our trekking in Esterri d’Aneu.