Our three month sabbatical started with bad weather in Europe. Total closure of Heathrow airport due to snow for more than a week, forced us to change plans. Instead of starting the three months with a five week trip through Laos and Cambodia, we directly flew to New Zealand. Auckland therefore was quite disappointing, especially given that the original plan promised a much more exotic start of our holidays. We decided to move on as quickly as possible and do something spectacular to distract our minds from the missed opportunity to visit Laos/Cambodia. 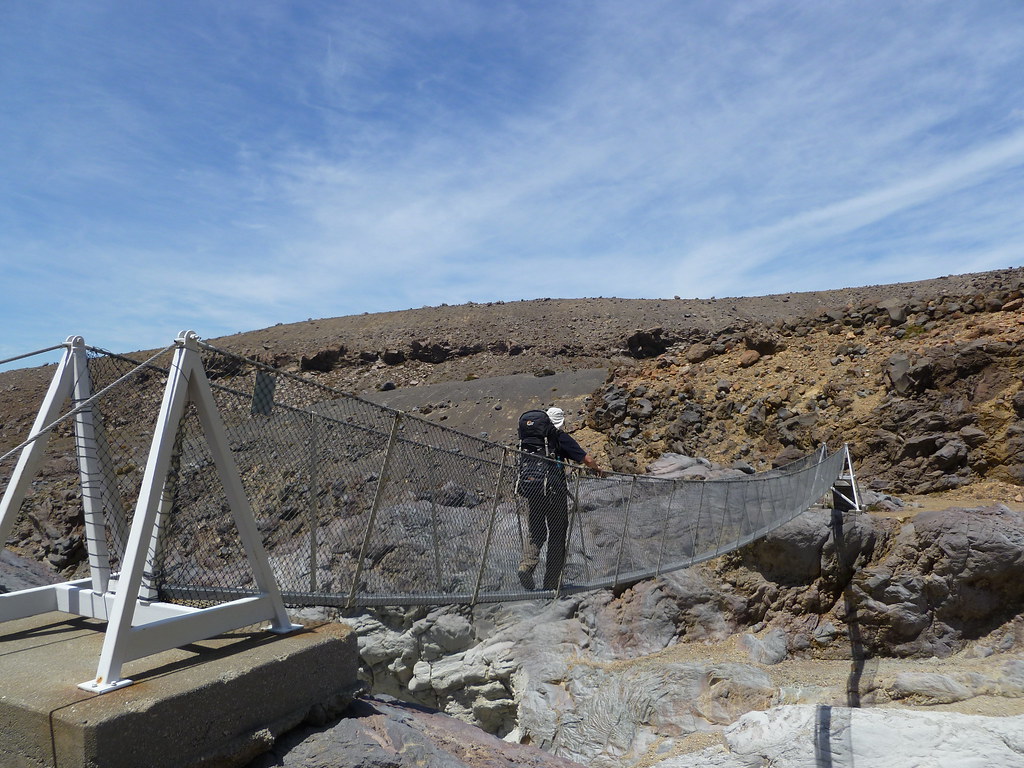 We booked huts on the Tongariro northern circuit (which is a so-called great walk making it mandatory to book huts or camp sites in advance). We wanted to combine this circuit with a trip around mount Ruapehu. The unstaffed huts in that second part of the trek do not have to be pre-booked (you just pay with hut tickets putting them in a ticket box), but after obtaining information from the park information center we decided to also bring our tent (“it may be crowded”). It turned out that the park information centre was totally uninformed, since there were almost no other hikers in that part of the park. Although carrying the full camping equipment made the going tougher, this first trek turned out to be very spectacular. The New Zealand hut system was a real surprise, especially the huts that are not part of the great walks. The cleanliness and the availability of water (mostly by collection of rainwater coming from the hut roofs in watertanks) makes that for most hikes there is no need to carry a tent. On the last part of the trek we only encountered small trekking groups, mostly from New Zealand, which gave us the opportunity to experience the friendliness of the country in which we will travel the next view months. Luckily we got a lift from a young couple from the trail-end to the nearest town Okahune after seven really wonderful trekking days. 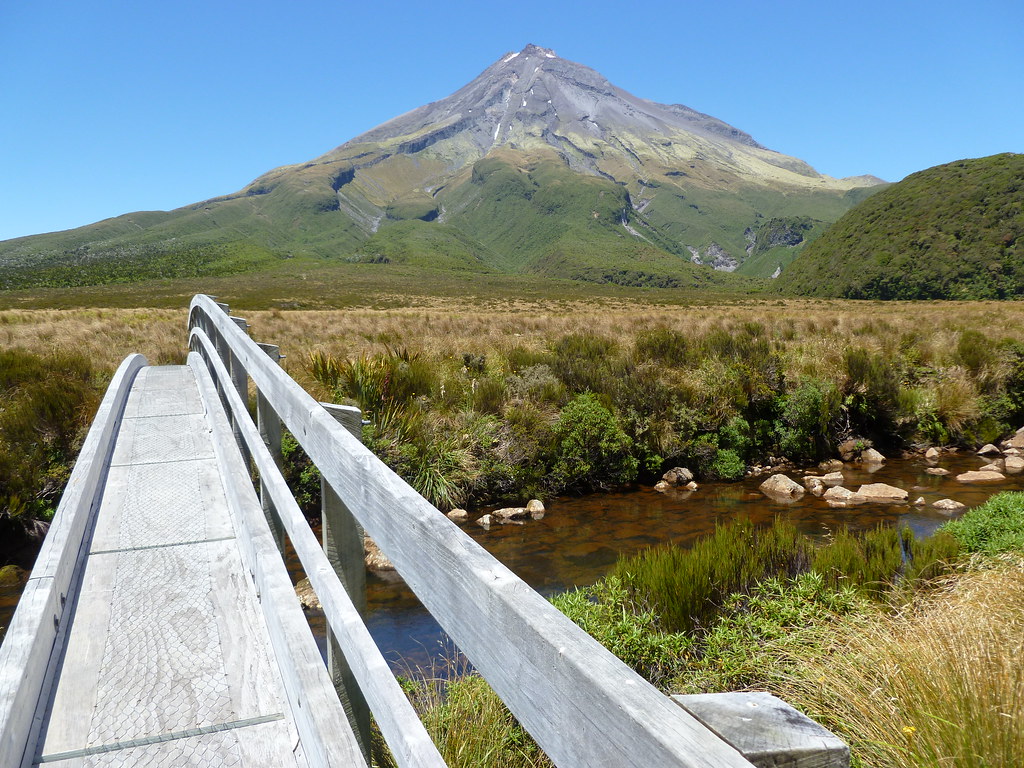 Traveling from Okahune to Whanganui and New Plymouth, is really easy due to the perfect bus transport system. The hostals in New Zealand are also really great, almost all having extensive cooking and relax facilities. Although the country is not unexpensive, this makes it possible to easily travel around and make your stay in cities more affordable and also more agreeable than staying in hotels. It is noticeable that this is a country with large amounts of backpackers visiting. We liked New Plymouth, the pubs, the cinema, the music festival in the park. And it is very close to the Mount Taranaki National Park, where we did a two-day hike (the Pouakai trek). This was a trek with a lot of variation again in natural micro-environments and we had the Pouakai hut to ourselves. The silence and the skies creating magical nightly pee-expiditions. 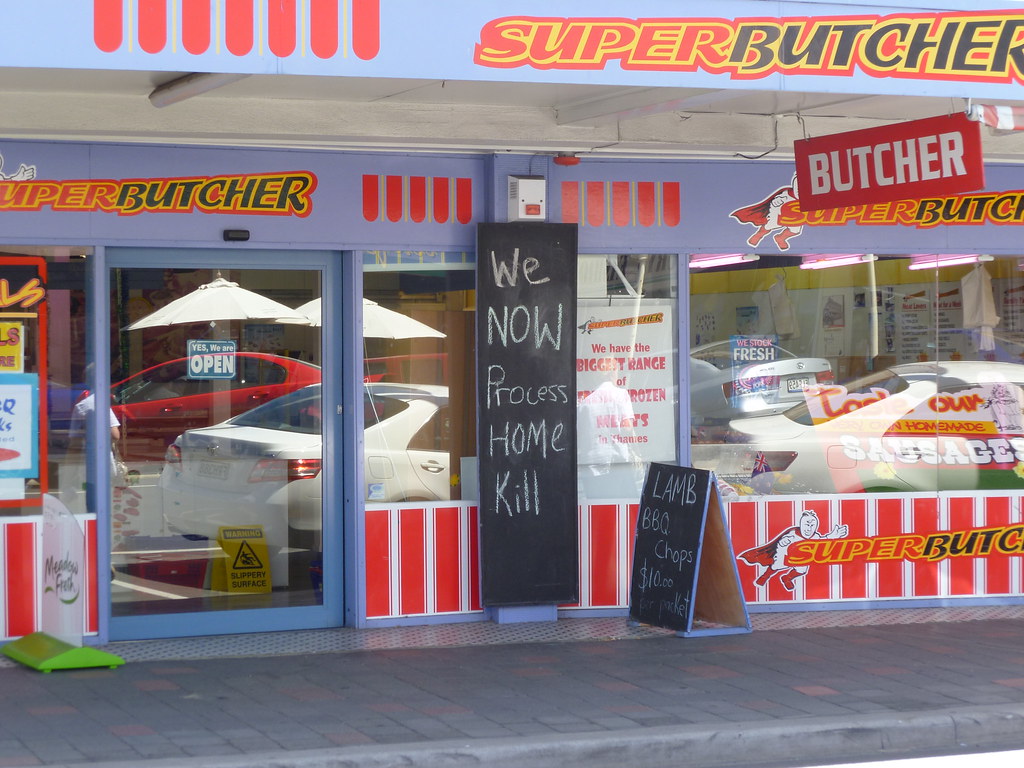 By bus we headed back to Auckland, where we wanted to rent a car to explore Northland. We wanted to have a little bit more freedom to visit places that were not reachable by public transport. In a magazine we had read about a DOC campground on a farm in the Mimiwhangata coastal park, having only a limited number of camp sites and situated on a nice part of the coast. We were lucky and could stay there a few days, camping and hiking along the enchanting bays. One of the next highlights of our trip to the north was Cape Reinga. Again we camped on the now very rugged and wild coast on a DOC campground, from where we could walk in an hour or so to Cape Reinga which is the northern most point of New Zealand. On the way back we took the east coast of Northland, but the weather had changed. Rain and mist made camping and hiking a little less pleasant, but the nice coast and Kauri tree parks made up for the weather. Since we had the car we decided to also pay a visit to the southern part of the Coromandel peninsula. We stayed in hostals in Thames and looked around in the small village, in between doing a two-day hike up to the Pinnacles hut. This hut of 70 sleeping bunks requires reservation, but due to bad weather we were there with only five other people. A strange experience, but again a really nice hike, and hut life is very relaxing. 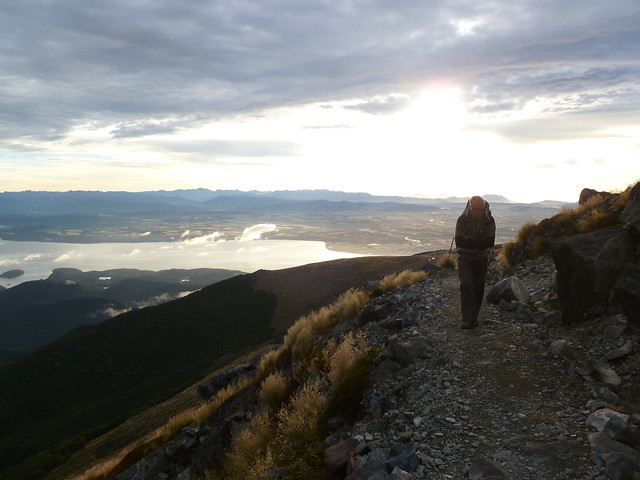 We dropped our car off at Auckland airport to fly to Queenstown on the south island. The spectacular approach route through the surrounding mountains, the clear blue skies made us very eager to start exploring the south island. After a few beautiful days in Queenstown we took the bus to Te Anau, where we stayed at a nice camping, did some shopping before starting our trek on the Kepler great walk. Highlights of this trek for us were the part between Luxmore hut and Iris Burn hut, hiking over ridges with nice fews deeper into fiordland, keas and all the smaller birds along the path. From Iris Burn hut we made an evening stroll to a nearby waterfall and had the luck to view a pair of blue duck (whio). The evening hut talk (which appeared mandatory on the great walks) by the hut warden turned into a one-man-show, a welcome change from the otherwise placid hut life.

Taking the early bus from Te Anau back to Queenstown gave us the opportunity to directly head on to Glenorchy. We have planned to do the so-called Rees-Dart track. In Glenorchy, we are warned however for bad weather, and high water levels, making some of the rivers on the track almost impossible to ford. After some deliberation we decided to change plans and do some (less spectacular, but still wonderful) alternative hikes in the surroundings. An overnight stay in a very small old miners hut is an experience in itself. 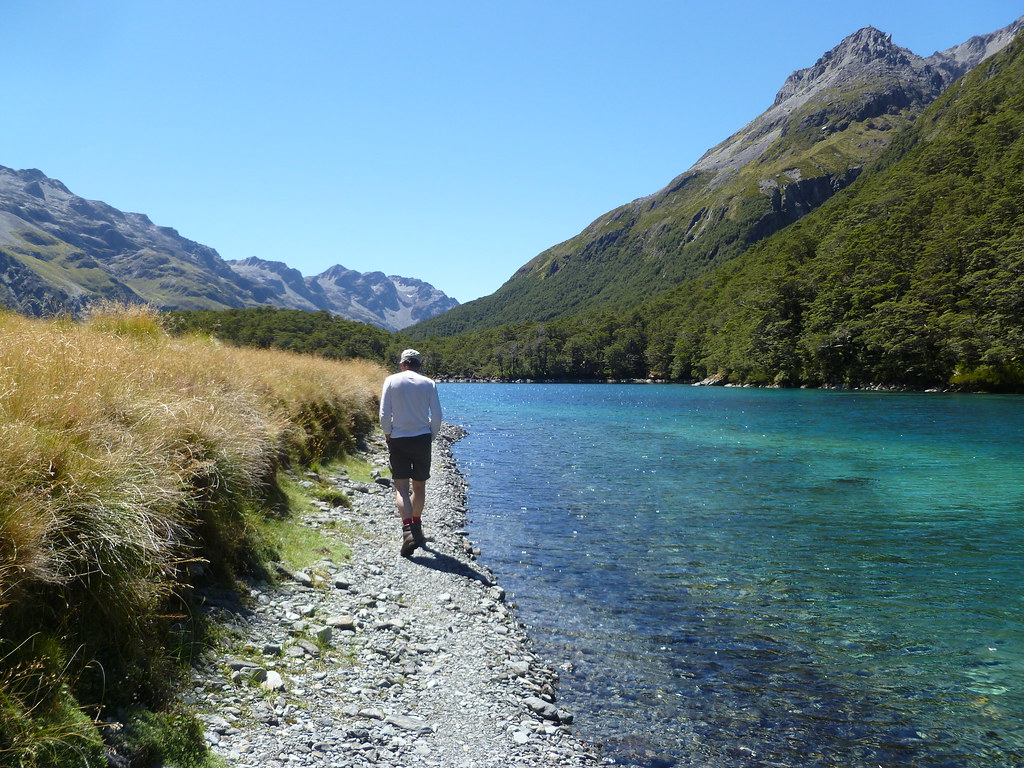 There was one trek that had been all the time on our list, after having read about it in a book, which was a trek in the Nelson Lakes National Park. We decided to do a round trip through the park so we could travel light via the many huts that are in the park. Apart from one rainy day we had terrific weather and the area is really gorgeous. Not that it is spectacular with many views, but the woods and rivers feel as ‘real nature’. The nicest part of the trip for us was going to the Blue Lake. From there it is possible to move on to the south and discover another part of the Nelson Lakes NP, but then you would have to carry a tent. The return journey had a spectacular ending with two days hiking along mountain ridges. The hike ended were it had started, St. Arnaud, which is a very small village, but with a great hostal and a few nice restaurants. 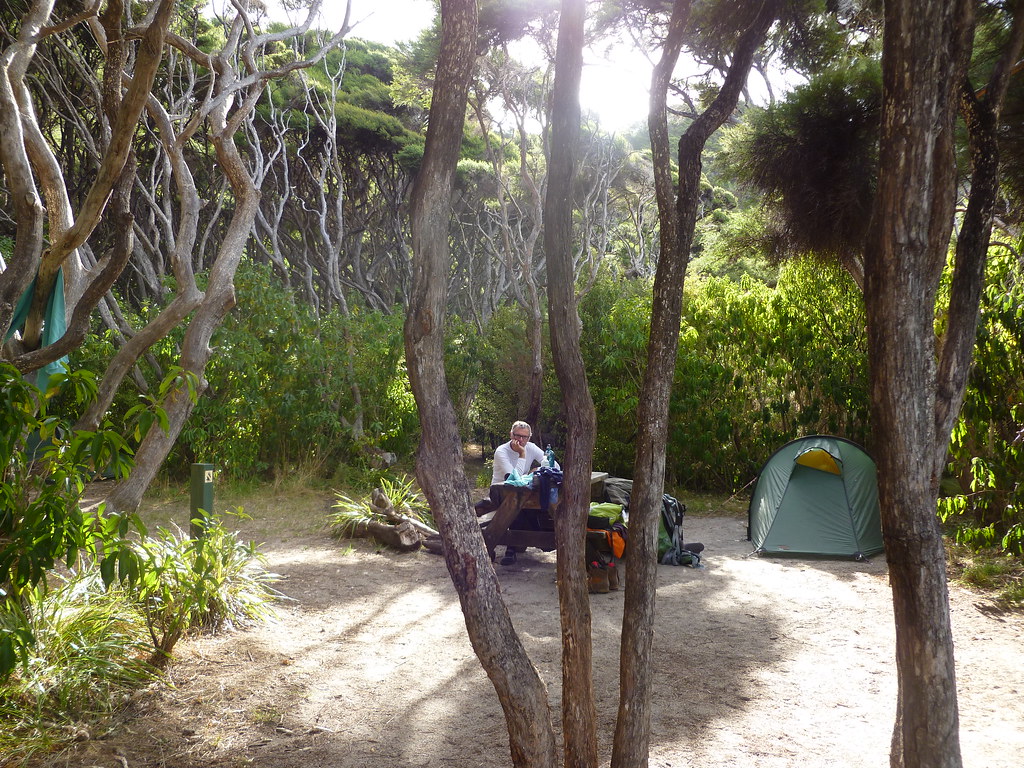 We headed back to Christchurch where we were going to pick up Rineke who was going to spend the last month with us. Not wanting to spend much time in a city we almost directly rented a car (since Rineke was recovering from an injured knee) and headed in the direction of Arthur’s Pass. A few days later the big earthquake hit Christchurch. The first week we travelled along the coast, doing some short walks so that the knee could get used to doing some work again. It was a nice week, apart from the not so good weather, but all of us found the area around Franz Josef glacier very disappointing. Too many people, an absurd number of tourist helicopters flying around and very touristic villages. For those seeking the quietness of nature: be warned. We easily travelled north along the coast, heading finally for the Kahurangi National Park. Here we did some day-hikes but a next visit to New Zealand, this will be one of our prime destinations. In between several day-hikes in different parts of this park, we also went up all the way north to Takaka, where we booked camp sites on the Abel Tasman Great Walk. We heard that the northern most part of this trek is relatively quiet. And it was, we did a two day-hike along the coast, and stayed overnight at a very intimate campground. 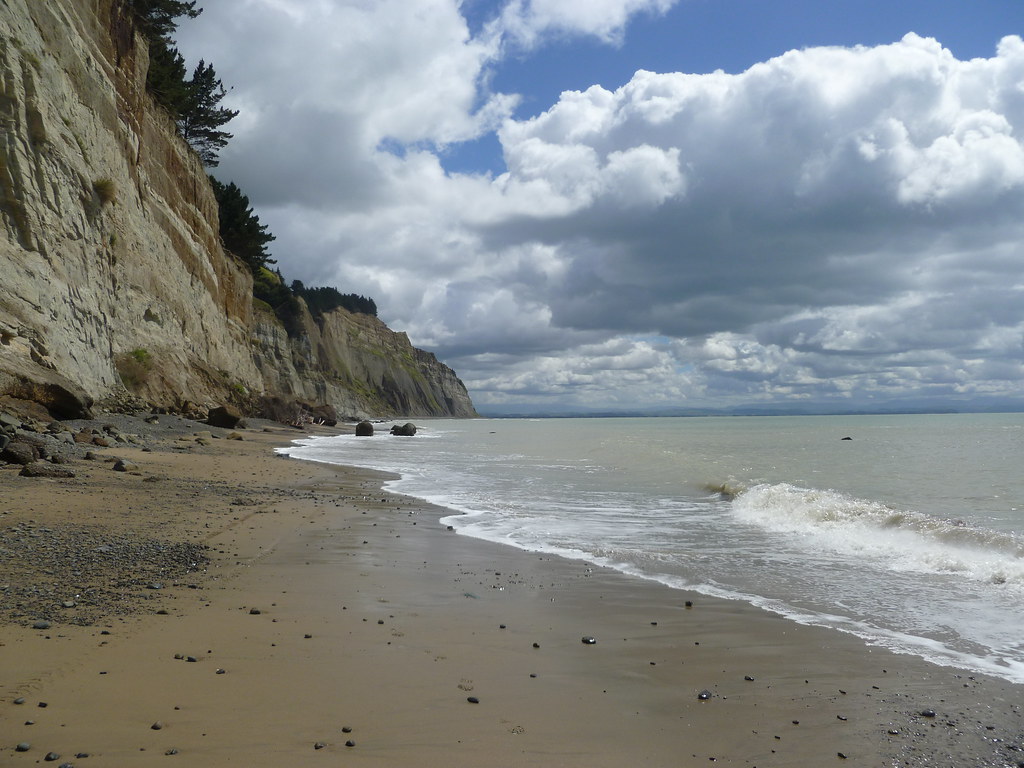 The last days on the south island we spend exploring the Marlborough Sounds on foot and by boat. After that we took the ferry from Picton to Wellington. We drove directly in the direction of Napier, with an overnight stay in the Empire hotels in Masterton, where the corridors remind us scenes from “the Shining”. The coast around Napier is spectacular, and we did some hiking there. A really nice spot to camp is the Waipatiki Beach Farm, where the first night we were almost on our own, but the second night we got company from a whole busload of 12 year old school kids. Eager to talk as they were, they also learned us something: to play the ukelele. A nice trip led us inland to the shores of Lake Waikaremoana in the Te Urewera National Park. 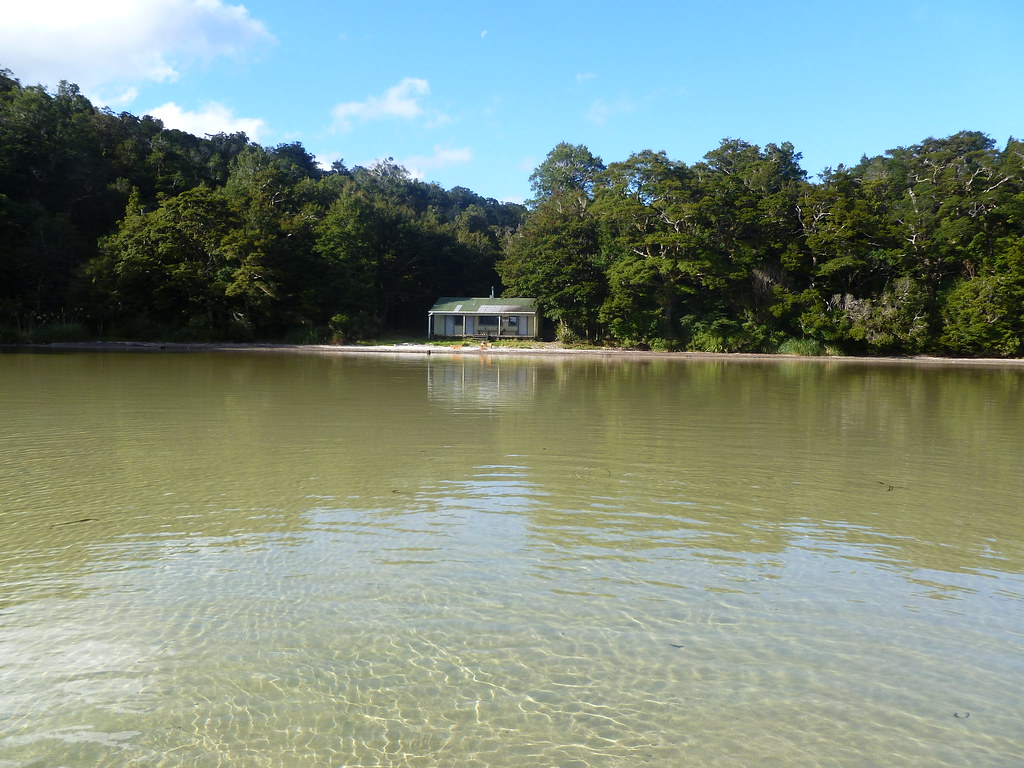 The Lake Waikaremoana Great Walk tours part of the Lake and is a popular trek, but also again here not many people were on the trek. Te Urewera NP is a very rugged park with lush forests and many birds. Besides the two-day hike along the lake we also hiked up to an even more remote spot, the Sandy Bay hut. The hike is all the way through a dense forest with ferns and typical New Zealand trees. The small hut is a real treasure, lying on a small sandy beach that continues for hundreds of meters in the shallow water. A strange experience to continue walking on a smooth sandy ground while standing in just a few decimeters of water. This definitely is a park to recommend if you like hiking in quiet and remote areas, and can enjoy these forested areas.