After an evening in Tromsø, we started our journey with a boat trip on the Hurtigruten to Honnigsvåg; the closest town to the Nordkapp. Knowing that the Nordkapp is a tourist trap, our main objective to go there was to experience the desolated feeling of this kind of northern town. Moreover,it was one of the places were we could take the bus to the Stabbursdalen National Park (NP). The overnight stay, the restaurants and buying the food for our trip, made us realize that Norway is an expensive country. 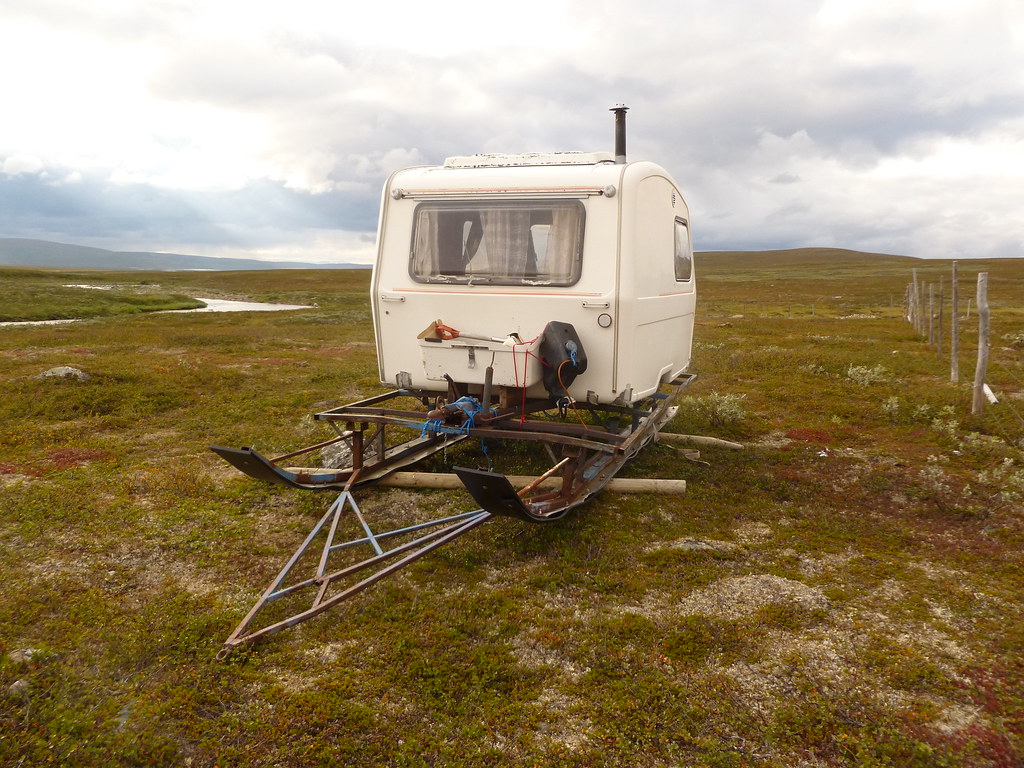 Our five day hiking trip across the Finnmarksvidda started with a marked path through the Stabbursdalen NP, which we followed during the first day. Slowly we hiked up the plateau and after crossing a local hill – Stuorra Binalvarn – we set up camp at a small lake close to the larger Corvošjávri lake. The next day our route continued without a trail and we aimed roughly southwest. At a certain point we decided to change our route a little and try going through to the small and inviting Ingungorsa canyon. Realizing that our progress in the canyon was very slow, we decided after three hours to climb up to the plateau and needed to use our GPS to find out were we were and how little we had proceeded. After a few more hours we encountered totally unexpected a dirt track (not on our maps). It proved to be one of the few tracks the Sami people use (and create with their four-wheel bikes) to inspect their reindeer herds. We ‘spoke’ with one of them that day. For two days we followed the track, mostly going through tundra landscape, sometimes having to cross rivers, wrestle through bogs, going over hills, and camping at tranquil places (the second day near the Njakkájávri, the third near a small caravan on enormous skis close to the Ceakkojohka). The dirt track ended at the end of the third day at the place were we encountered one of the very long reindeer fences that divide up the Finnmarks plateau. 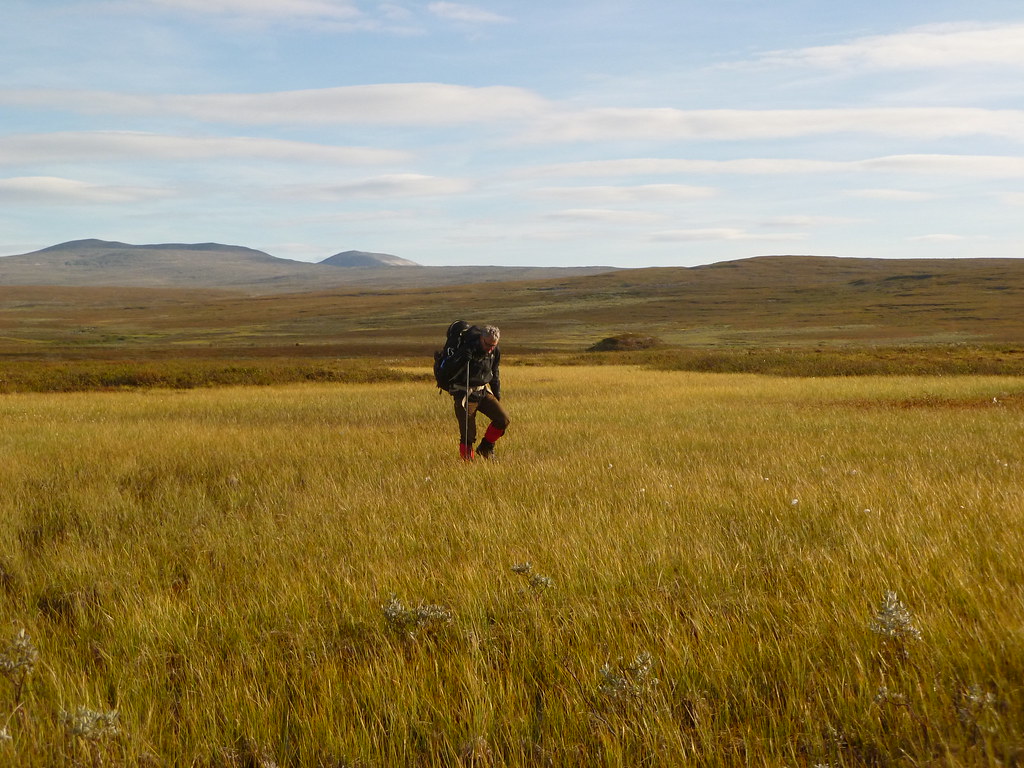 Many boggy areas to cross

The fourth day we therefore again went cross country aiming for the river Gaskajohka between the northern and southern Stabbersdalsvannet. But first we had to cross a very boggy part of the route, and after that struggled for hours through thick bushes along the shore of the northern lake. Again a moment of learning: better stay high up the hills, where the going is much easier. It was a really nice day so after a long rest in the sun we hiked a few more hours and set up camp at a sheltered spot close to a river. The fifth day we hiked thirty-five kilometers to the city of Alta, the first part again on a dirt track, later descending from the plateau through the woods, with the last eight kilometers or so unfortunately on the road.

Back in Narvik, we decided to rent a car to explore the Vesteralen and Lofoten islands. Our first stop on the Vesteralen was in Stø where we stayed in a Rorbuer (old fishers cabin). An even nicer and very pittoresque place is Nyskund, where we stayed later. Once on the Lofoten the weather became worse; lots of rain. Nevertheless we had one of the nicest encounters in our cabin in Fredvang: during breakfast we saw a large sea eagle wavering above the water in the fjord! The rain continued and after some sightseeing on the Lofoten we went back to Narvik and deciced to continue east since we still had a car. We drove all the way to Abisko in Sweden, a holiday resort (of the good sort). The next day we did a very nice hike in the area (Kagervagge) and we really liked the landscape. The decision to return the car and come back here for a serious hike was quickly taken. Back in Narvik we found a nice hostal up on the hill with a beautiful view where we could leave some of our luggage for some days. 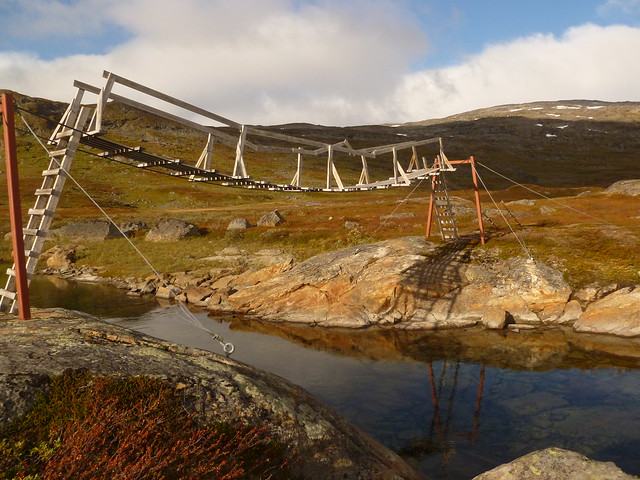 Weaponed with a key for the huts of Den Norske Turistforening we took the train to Katterad, from where we hiked in only a few hours to the Hunddalshytta. We were amazed to see how well equipped the huts are, with matrasses, duvets, pots and pans, gas, a stove and wood. We stayed in for the rest of the day, since it started raining and snowing. The next day we had a wonderful start in a snowy world in a magical stony landscape. After a long day of crossing rivers and struggling along muddy paths we reached the next hut close to the Swedish border, the Cunajávrihytta. Here we made the decision to change our plans, since in the original plan we had to cross a steep and high pass, and we weren’t sure about the snow conditions. Instead we had a very easy day first to the nearest Swedisch (staffed) hut Unna Allakas, and from there we undertook a nice hike in the afternoon in the surroundings of the hut. A wonderful day both due to the landscape as well as to the very sunny weather. The next stage through typical tundra and birch woods brought us to the Abiskojaure hut, on the Kungsleden trail. From there we ended our trip in Abisko, where we could take the train back to Narvik. All in all this part of Sweden and Norway highly appealed to us, and asks for a longer trekking in the area.