We started our three-months journey in Buenos Aires. After getting acquainted with Argentina, we flew to Ushuaia. It is a good idea to plan this flight in advance, because it was fully booked. Ushuaia calls itself the Capital of Antarctica but Puerto Williams on Isla Navarino claims the same. Is this the first token of the rivalry between Chile and Argentina (examples of which we will encounter frequently)? Ushuaia is getting popular, with lots of tourist. Nevertheless, going to the National Park Tierra del Fuego is a good experience with nice hiking. We encountered there the rare Magelhanean woodpecker. 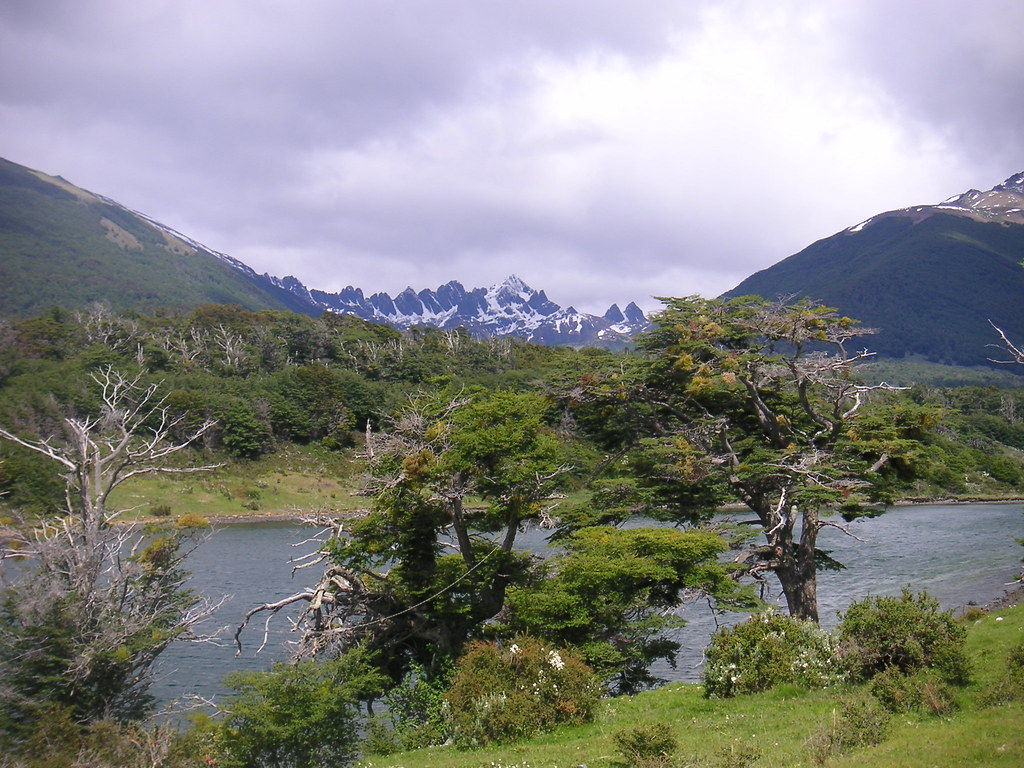 View on the Dientes mountain range

After some days in Ushuaia we made the semi-legal boat trip to Puerto Navarino, a small navy basis on Isla Navarino. A small bus took us to Puerto Williams, where we started our hike to the Dientes Mountain Range after having eaten a home-made pie in the local restaurant. The trail into the mountains was very wet, and after a day ploughing through the mud, we tried for two hours to find a spot to camp. We put up our tent and fell asleep. In the middle of the night it started snowing. This meant that the following day, the trail was even more muddy! We decided to go back, since there was no way to cross the rivers and go across high passes with the snow. Back in Puerto Williams we met with other people sharing the same experience; they also went back earlier. After having spent a few days in Puerto Williams, enjoying the cooking of grandma in the local restaurant, we went back to Ushuaia. We had to wait there a few days for the next bus to El Chalten, and we spent the time by making short (hiking) trips in the neighborhood. 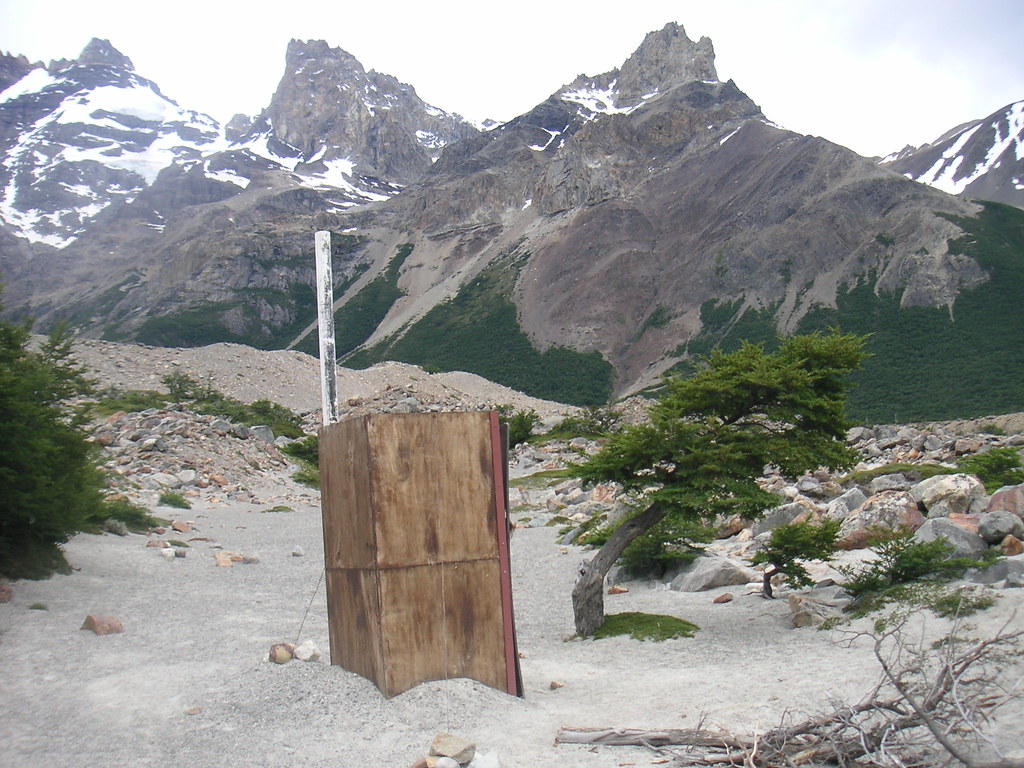 Starting in El Chalten we made a trekking through the Fitzroy area National Park Los Glaciares). We expected it to be too crowded, so in first instance, we hadn’t planned to go there, but since we had to quit the trekking on Isla Navarino we did this anyway. But in the end it turned out to be a really beautiful trek in a wonderful surrounding. We were there on New Year’s eve, but because we were very tired from the hiking, we decided to stick to the Dutch time zone. We opened our carton of red wine at 8 o’clock, celebrating the Dutch New Year, after which we went to sleep. From El Chalten, we hiked to Chile. There is a really nice crossing close to El Chalten, which isn’t that frequently used, and can only be crossed on foot. To do so we hiked along the Lago del Desierto, where we camped at the grounds of the Argentinian border police. The next day we hiked from Argentina to Chile, where you can stay on the grounds of a ranch, Candelario Mancilla near the Lago O’Higgins. We knew that twice a week a tourist boat, which also serves as a taxi, arrives there and crosses the lake to Villa O’Higgins. This small town is the end point of the Carretera Austral, the (part) dirt road that runs through the Region XI. This region is 1.5 times the size of the Netherlands, but with only 100 000 inhabitants, half of them living in the capital Coyhaique. 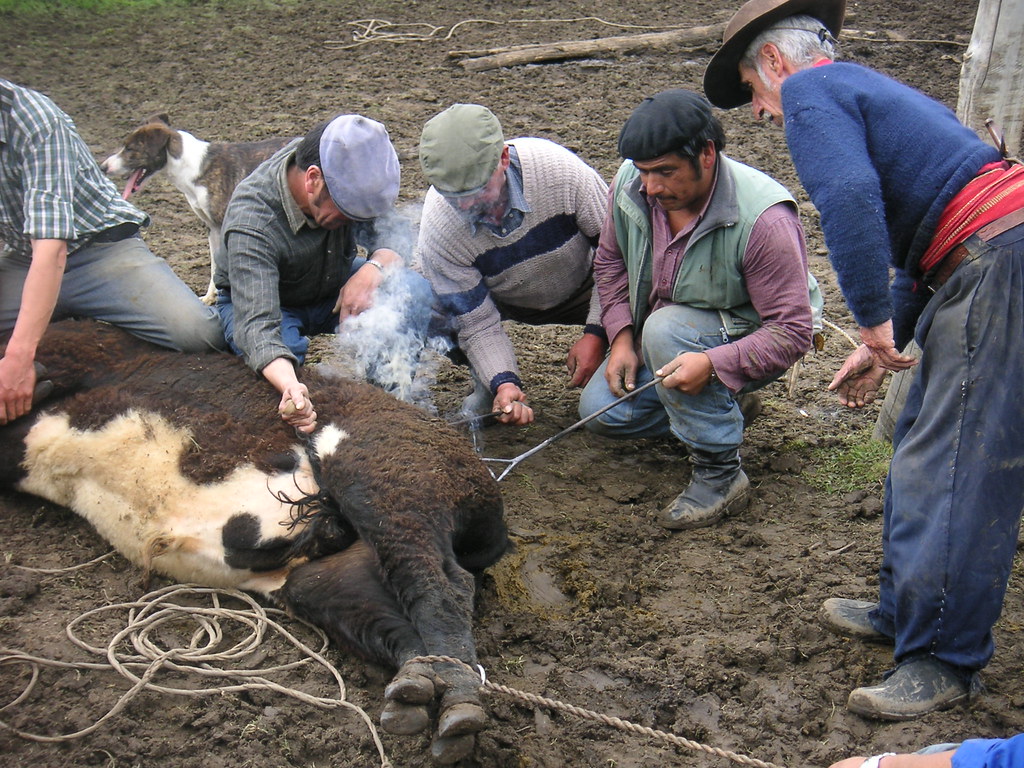 From Villa O’Higgins, we wanted to hike through the Andes (so not along the Carretera) to Cochrane; a small town 200 km to the north. We had some maps from the 70’s with not much detail (scale 1:250 000), so we were advised to take a guide. We met two people from Austria, Timo and Mathilde, who would like to join, but they carried quite heavy backpacks. So in the end we decided to look for a guide (a local horse-men, an ‘arriero’) that could take horses to carry our backpacks. After four days of asking around – even the major was helping us (they want to promote tourism in Villa O’Higgins) – we were really lucky that Manuel visited town, and wanted to guide us. We started our trekking at the farm where Manuel works and spend a day there, because calves had to be marked. After that we hiked for eight days, Manuel and our backpacks on three horses and the four of us on foot. A schematic overview of this route can be found at antigua ruta de los pioneros. For us it turned out to be the highlight of our three months holiday. We camped along the route, near the few ranches that we encountered, or close to constructions of wood that are usually used by the arrieros, when they travel around in that area. Manuel slept in or near those constructions, lying on his saddles, lamb-skins and blankets with a piece of canvas covering him, in case it started to rain. On one of the ranches we came along, his eighteen year old daughter lived, two days on horseback from the civilized world. All by herself and her two year old son, when her man was working on the roads. After a few days we crossed a high pass in a really amazing landscape, with condors coming to check when we set up camp. 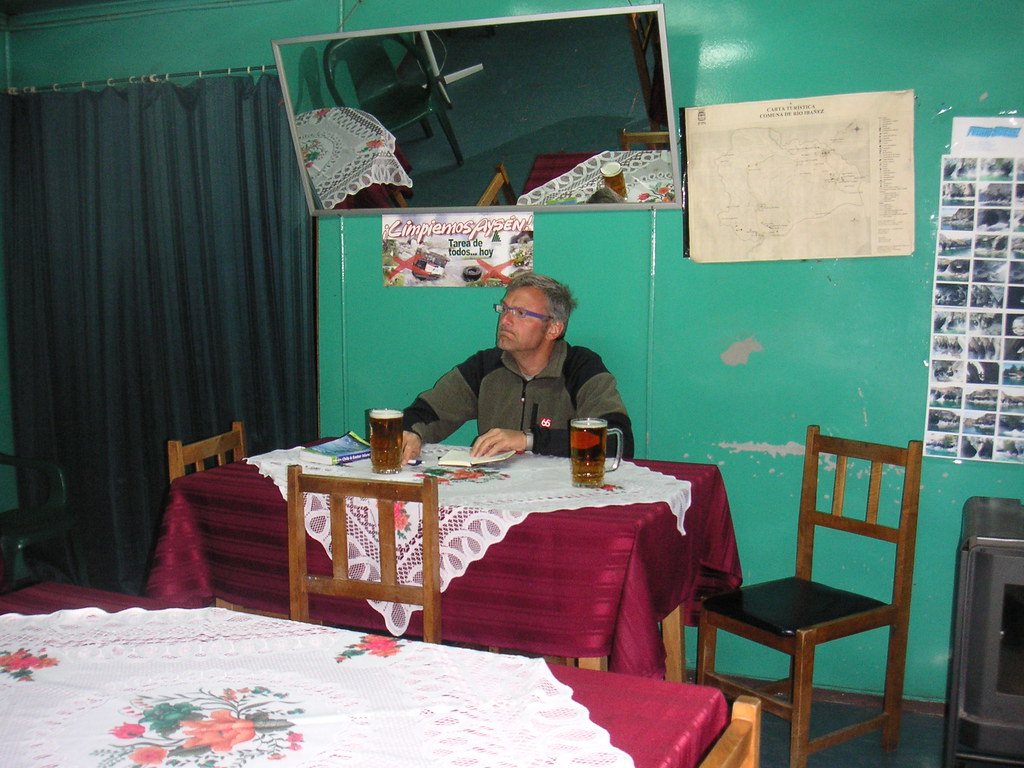 From Cochrane, we moved on by bus to the Reserva Nacional Cerro Castillo; a beautiful rugged area and a serrated mountain range with hanging glaciers. One day was really a highlight when we camped on a flat pass with behind us the massif of Cerro Castillo with his hanging glacier (making incredible thundering noises). From the other side of the pass we could overlook a very large area with broad valleys and mountain ranges, all the way to Lago General Carrera, 50 km to the north! We descended to the Villa Cerro Castillo, again a nice small pioneers village. All the villages were established only a few decades ago with the construction of the Carretera Austral. This was a monstrous project, conducted under the Pinochet regimen, which still exists for 80% of the 1500 km out of gravel. That’s what you can call the southern highway!!

After a few days in Coyhaique waiting for a bus heading north, which of course only runs a few times a week, we went to Chaiten. A nice small village and base of operations for the nearby Parque Pumalin (www.pumalinpark.org) where we hiked for two days. It’s a beautiful park, but since we again encountered swarms of tabanos (reminding us of the nightmarish trek in the lakes district four year earlier), two days was enough. Tabanos are very annoying horse flies that one encounters in the lake district during the summer months when on low elevations, which was exactly the reason to skip the lake district on this journey. From the north end of the Park Pumalin we made a nice boat trip to Hornopiren. Actually there is no road between the two places and the Carretera Austral on both sides is connected by a ferry. In the morning when we left, zea lions and dolphins were swimming near the ferry. With pain in our hearts, we left Patagonia, taking the night bus from Puerto Montt to Talca, more to the centre of Chile. 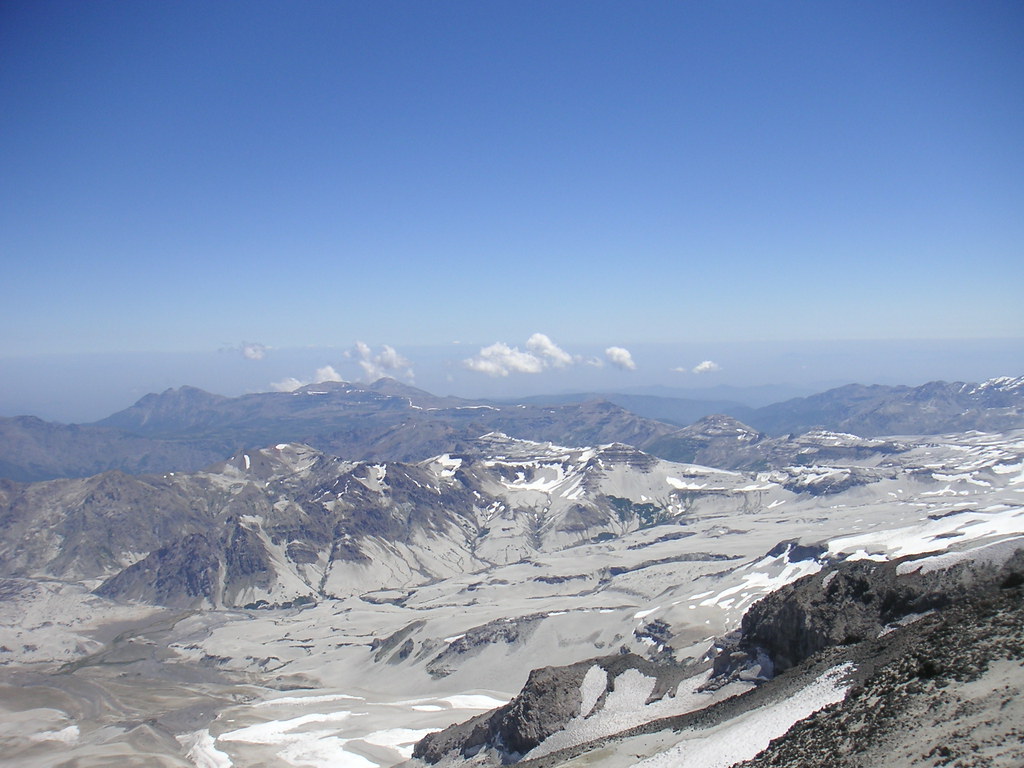 From Talca, which is 200 km south of Santiago, we hiked for eight days in the rugged Andes of central Chile. The trek was a combination of routes from a very nice website on trekking in central Chile (www.trekkingchile.com). Because during this three month holiday we carried more weight than usual it was not at all an easy stroll in the woods; not to mention the high temperatures and the type of terrain. However, the nature is magnificent and totally different than we had ever seen before. Especially the part that was farthest away, close to the Descabezado grande volcano. We started near Vilches, in the reserva nacional Altos de Lircay, from there we hiked for three days to the Descabezado. Hiking to the volcano crater is a two steps up, one step down dancing procedure, because of all the pumice and gravel. But the views are magnificent and descending is like skying down a snow field. Subsequently, we hiked back and across the Guamparo ridge where we reached another park: reserva nacional Siete Tazas, near Curico. After our eight days of hiking we rested for a few days in a really nice hostal close to Talca, Casa Chueca.

Then we moved to Argentina (Mendoza) again and rented a 4WD to visit a few parks south of Mendoza. We visited three of those, where one was high up in the Andes: a beautiful park with a large centrally located lake. This used to be a crater of a vulcano and right behind the lake was a huge vulcano. We have never seen so many guanacos (family of the llama) in such beautiful landscapes! Later – after our 4WD broke down – we went with two guides to a park with 400 vulcanos of different sizes and a large lakes with many flamengos. The guides were 70 and 75 years old and partners and we went with their own car. On the return trip, the man put on a jazz cd from the fifties but forgot to turn of the repeat switch, so we had to listen to the same some all over again at rock concert volume! 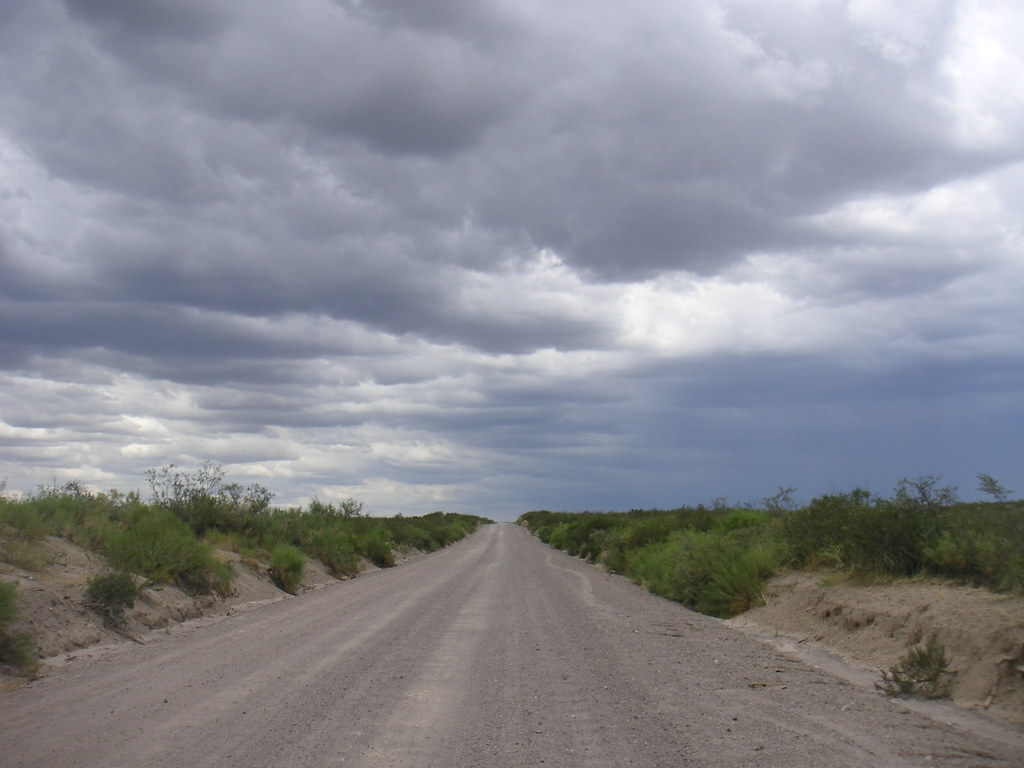 After a while, Age turned off the repeat switch. These guides, by the way, were a good example of the harsh life in Argentina. Together they received a state pension of 100 euro per month. In the summer, they did guided tours (they both speak English) to save some money for the winter. All Argentines we spoke to have similar stories: they earn little, have multiple jobs (also the university graduates), the distribution of the jobs is not really fair, and they complain about inefficiency. Argentina appears to be more wealthy than Chili (e.g. better buildings), but this is only seemingly so. For us westerners, Argentina is a cheap country. As said earlier, our car broke down (luckily enough not on the 100 km stretch of dirt road we travelled some days earlier) and AVIS could not provide us with a replacement. Hence, we had to change our plans. 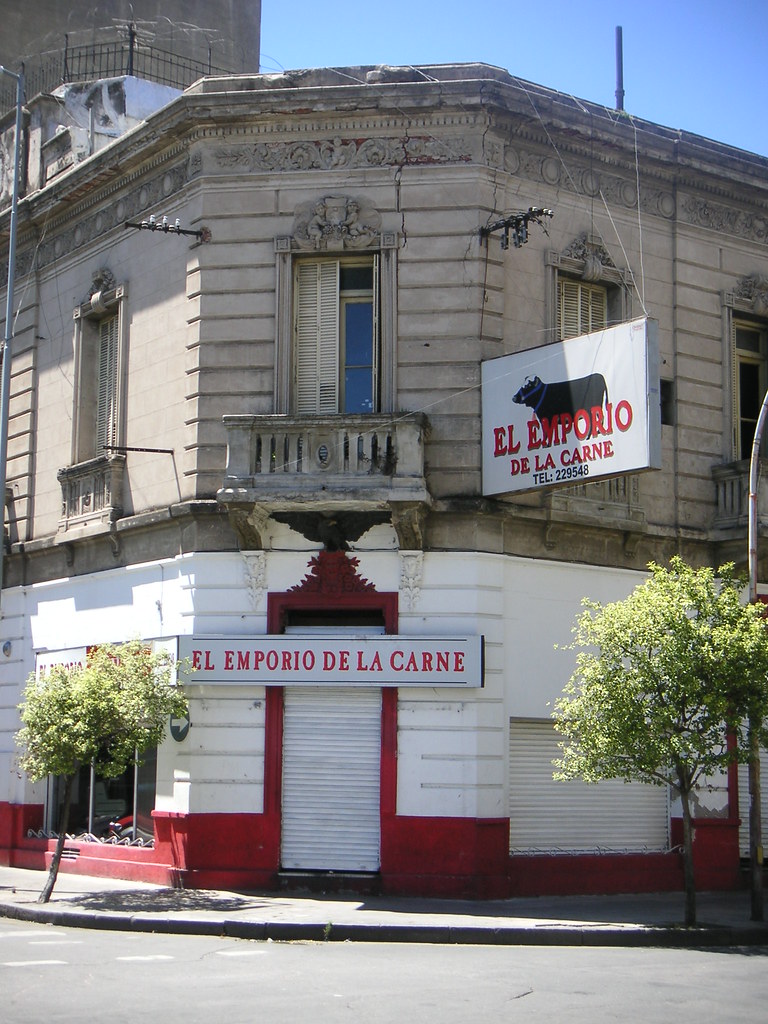 After having returned to Mendoza, we rented mountain bikes to visit some wineries in the vicinity. Subsequently, we went to Cordoba to rent a car ( a normal one this time) to visit some parks where we hiked and camped. Space to explain all this is limited, suffices to say that Argentina is a beautful country with overwhelming landscapes. Via Cordoba we returned to Buenos Aires for three days of sightseeing, music (the tango in this case), and shopping. Then back to the Netherlands…change of atmosphere and culture… but we will survive.